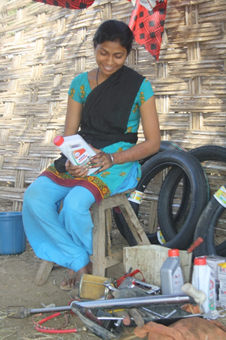 22 years old Urmila Kende is from the village Buti situated 80 kilometers away from the Khandwa district HQ. She attended a tailoring course, and her teacher took her to Bangalore in 2018. She hardly stayed for six months and began feeling homesick. She returned somehow and decided never to go back. She persisted with tailoring at home, but much work wasn’t coming around. Then the COVID 19 crisis developed and work at the village or outside became scarce. In any case, she wasn’t ready to migrate.

She happened to attend a village meeting organized by Spandan Samaj Seva Samiti, where the women discussed micro-enterprises, they can take up and may not have to venture far from home. A Series of meetings helped these Korku tribe women consider what they can do. During these meetings, an idea was floated that why can’t women do what is usually considered in the male domain. In this course, the idea of motorbike repair popped up, and Urmila and two more young tribal girls were instantly drawn.

During the first lockdown in the summers of 2020, field training was conducted in the courtyard of Urmila. An old bike was mustered, and a local male mechanic obliged to train them. Three girls learned the basics of motorcycle repairing. With small support of spare parts and spanners etc., they set up their repairing shops at two locations.

Urmila’s set up her shop on the roadside and soon people began to come for bike repairs. She has also added snacks at the shop so that customers can have some bites while they wait for their bikes to get repaired.

Urmila is now training three more girls. They are the first to do so among their Korku kinswomen. 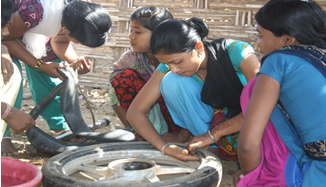 Smoking is injurious to health and so is the smoke produced from the traditional chulhas(Stoves). The traditional chulha uses wood for cooking. They not only pollute the environment but also causes various respiratory diseases and lungs infections. Tuberculosis, low birth weight, heart diseases, still birth are the other diseases that can happen due to these. Coughing is the most common among the women, pregnant women and children using traditional chulhas at homes. It is the time to make these women aware of the harmful effects of using these traditional chulhas and so we have come up with introducing SMOKELESS chulhas. These are designed in such a way that it uses less wood, cooks more efficiently and produces less smoke. We are making women aware to make these chulhas at home.